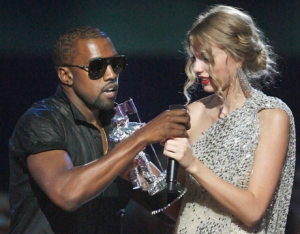 Is it my line now? The autocue is wonky...

I must admit, I’m still unconvinced that this isn’t a big fat MTV sponsored publicity stunt.

Last time round it was Sacha Baron Cohen’s Bruno and his bare nekked butt cheeks landing around Eminems chops.

This time, we have Kanye ‘interrupting’ Taylor Swift’s acceptance speech with a ‘Beyonce was robbed’ Kodak moment. Smacks of a little MTV / record company PR me thinks…

Anyway, if you have five minutes to waste today, here’s a little game for you. Make sure you give the Jackass (thanks Obama), a good beating and let Ms. Swift finish that speech.

Iain Morrison is a senior marketer in the British Tourism Industry. And thinks a lot more people know who Taylor Swift is now than ever before.